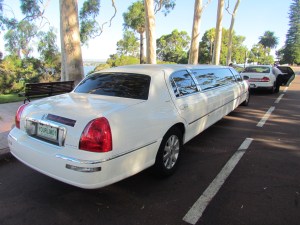 Hayley and Adam originally booked two wedding cars, but after talking to Tom at

YourLimo.com.au they realised that getting the ten seater to pick up the groom

use of the limousine on the day.

The limo dropped the guys off and then headed up to Sorrento for our bride Hayley.

pick them up and take them to their hotel.

The limo then when back to the reception and picked up family members and took them to Sorrento and Mullaloo, a much better option than waiting for non existing taxi’s!!!