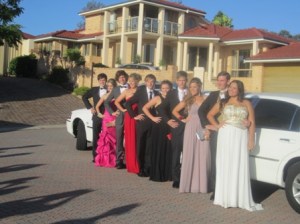 The clients from Joondalup Baptist College came around to Tom”s house In Iluka,which is next door to Ocean Reef,and did the sensible thing of looking at the limousine before booking it for their students Formal Ball.

The pick up in Ocean Reef went well,the girls looked fantastic,and some of the mums did too!!

The guys were quickly entered into the festivities bY the chauffeur Tom,with a little ritual that always breaks up any nerves on the big night,and makes a great picture too,no details,you have to book to find out!!

Kings Park had been closed for the evening because of 2 concerts being held at the same time,and there was also a big show with Cliff Richard up in the Swan Valley,so Limo’s were in short supply.

Luckily the Limo from YOURLIMO was booked earlier in the year and Tom NEVER lets anyone down,even though some of the offers coming for cars on the night were for a lot more money,once we book your limo,thats yours for the night.

Tom Arranged for the Limo to go to East Perth,to the river basin,as Barrack st jetty is another casualty of the roadworks.

Tom had another Limo that picked up from Connolly which was going to the same ball,stop there as well,and the guys took some pics on the bridge over the river.

The choice of music on the Ipods was good too,not too much Duff-Duff,good music. we dropped off at the Pan Pacific and went back later at midnight to pick up before the students scattered to various after parties.